The lychee is one of the most delicious fruits you will ever taste our boss Greg Daley says they are his favourite. Lychees are a fruit tree which can have what we like to call a Bumper Crop. I visited my Nanna Maisy last week in Tweed Heads who has a lychee tree which she got from Daleys Nursery 20 years ago and it looked fantastic. 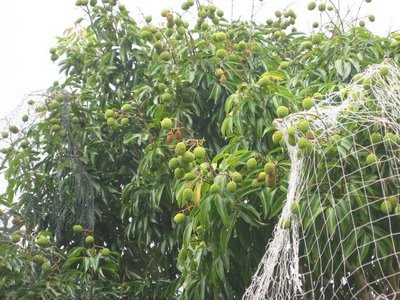 It got it's first harvest in the first 3 years when it was small however when it was 10 years old it got a disease which caused a lot of the leaves to fall off. Maisy was going to cut it down however it came good and ever since it has been getting huge crops like this one. She says she never waters it. 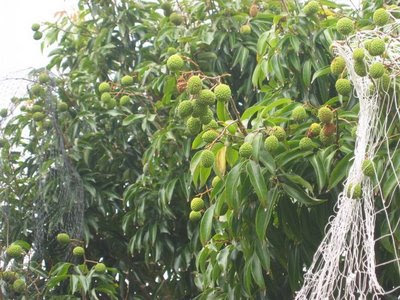 2 years ago a flying fox got caught in one of the nets and luckily my brother visited that day. He freed the bat and took off all the nets. Although it was uncovered not one bat visited the lychee that season. 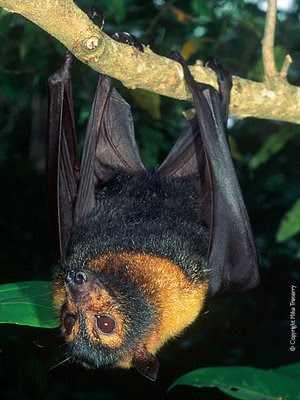 Unfortunately their memory is only for a season and last year the Bats came when the lychees were the same size as the ones pictured, they ate every single lychee even though they were green.

Because the tree is huge Nanna has placed only a few nets over the lychees at head hight. The bats came again the last 2 nights and each morning nanna is picking up 2 buckets full of half eaten green lychees they have however not eaten the ones at the bottom with the nets.

After it crops I am going to visit and give it a very aggressive prune to about 2.5 meters so that it can become mananageable again.